Our Neighborhood. Our Story.

The land that is today Corona del Mar was originally a part of Spanish land grants and eventually ended up being sold to James Irvine as part of 108,000 acres he bought in 1875 for $150,000.   When James passed away in 1886, the Irvine Ranch went into a trust for James II to receive on his 25th birthday in 1893.  At the turn of the century, the Irvine Ranch was primarily a farm and the region had suffered through several years of drought conditions, receiving less than half the rain it had been getting a decade earlier.  Seeing the coastal property as having little value and in need of cash, in 1904 Irvine agreed to sell George E. Hart 700 acres of what is now Corona del Mar.
​
Born in 1859 in New Hampshire, Hart envisioned a chain of beach towns from Newport to San Juan Capistrano to attract tourists and residents.  He had made money building and running saw mills before eventually getting into real estate and moving to Los Angeles in 1900.  He had partnered with Henry Huntington, whose uncle had owned the Southern Pacific before passing away, and used some of the Huntington fortune to purchase the Pacific Electric Railway in LA.  As the Pacific was laying track south through the beach towns, Hart approached Irvine about selling him land.  Hart ended up paying $150 an acre, giving Irvine $10K in the first 10 days after the sale, and then three annual payments of $32K each in 1905, 1906, and 1907.  The land included everything from Jamboree to Hazel and from East Coast Highway & 5th to the Ocean.  Hart named the development Corona del Mar, meaning Crown of the Sea. 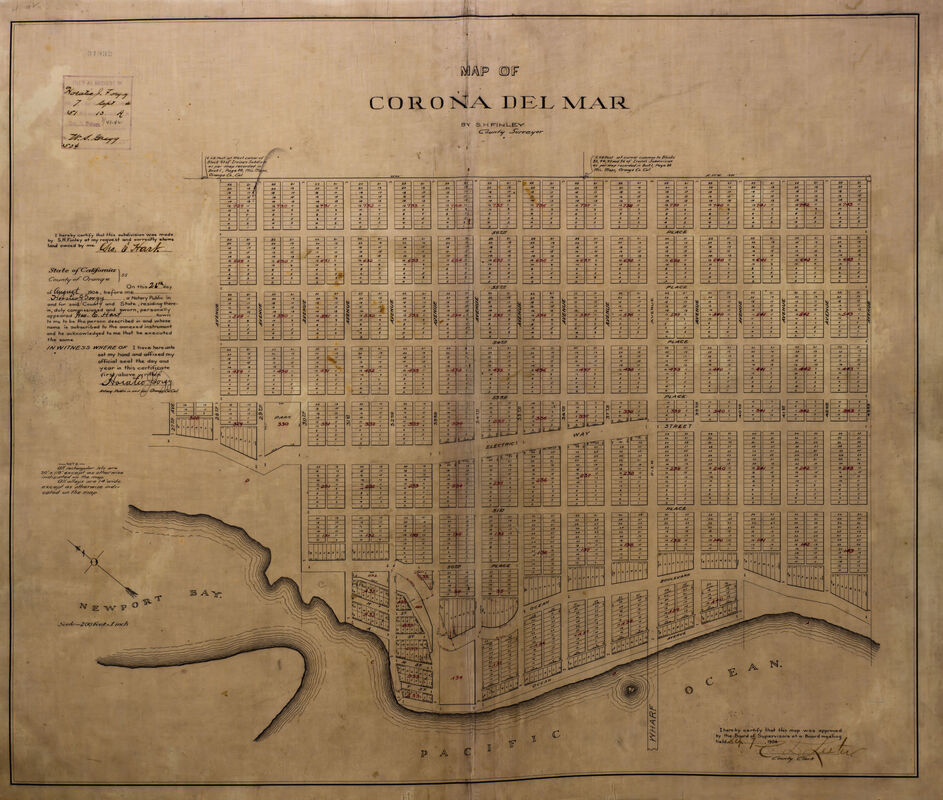 In July 1904, Hart took out an ad in Santa Ana’s Daily Evening Blade offering lots for sale and promising a 600 foot ocean pier, 300 foot pier into the Bay, running water, and an 80 foot boulevard on Ocean and Bay Streets.  Prices started at $100 per lot with Beach lots selling for up to $750.  W. B. Artz of Tustin & C.S. Forgy of Santa Ana were chosen as real estate agents and the land was surveyed by Colonel S.H. Finley and then graded.  The lay out of the Village was pretty similar to how it is today with 2,300 parcels of land made up of 30 x 120 foot lots.  The first subdivision of the land was filed on September 4, 1904, representing the official start of Corona del Mar.
​
Development got underway as Electric Way (now Bayside), Pier Avenue (Marguerite), and Ocean Blvd were graded and oiled and the rest of the North-South streets were numbered.  An extension of the street numbers on Balboa Island, they went from 27th (Avocado) to 43rd (Poppy) as Hazel was added later.  East-West Streets were numbered from 50th Place (Bayview) to 57th (5th Avenue) with a few streets being lettered.  Construction of an oceanfront pleasure pier began in July 1905 at Big Corona but a storm damaged it before it was finished.  Another storm did further damage the next year.  It stood until 1912 when a storm took down the remaining structure. 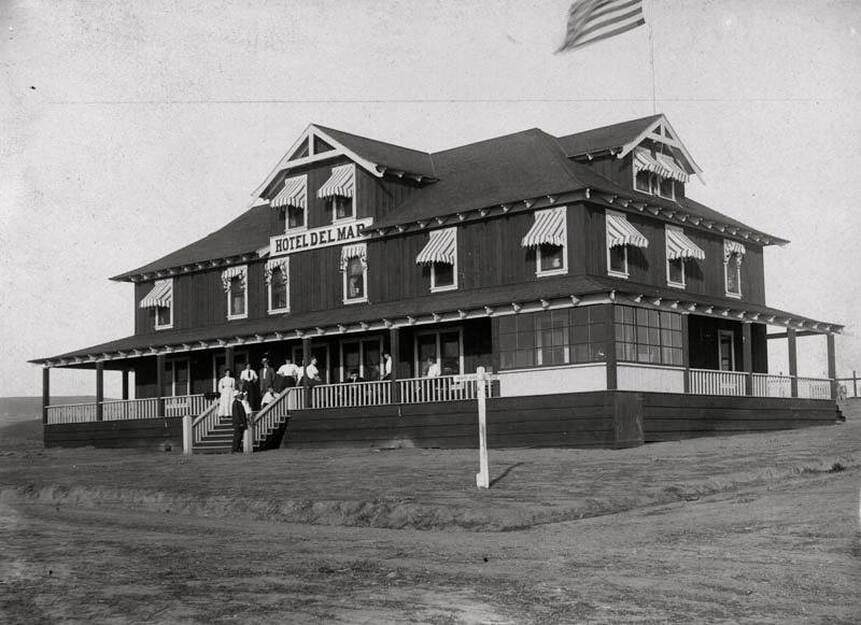 Property sales were slow, after selling a few lots in 1904, no sales were made in 1905 or 1906 and no houses or buildings had been built.  Access and water service were among the issues.  In 1906, Hart returned 360 acres back to the Irvine Company leaving his stake at 347 acres.  To improve access, Hart decided to build a road that went from the Back Bay, down Bayside and up to the Hotel Del Mar.  The hotel opened in July 1907 and was described as having three stories and 30 guest rooms, although the third story was actually just a dormer and there were only 18 guest rooms.  S.T. Hall, the operating manager of Hart & Co. was the architect and builder of the hotel.
​
The first houses would be built in CdM in 1910, Mary Everett from Pasadena and her friend Alice Alden purchased lots 1, 2, & 3 of Block 35, which is at the corner of Iris and Ocean, and split them with each having 1 ½ lots.  Mary named her house Happy House while Alice’s was Quarterdeck.  Happy House (2920 Ocean Blvd) survived until 2003 while Quarterdeck (2928 Ocean Blvd) lasted for almost 110 years before being torn down in 2017 to be replaced by a house that is presently listed for $25 million.  In addition to these two homes, another home – Ingle Go Jang was built two doors down on Ocean in 1910.  It would last until 2015, when it was torn down.  All of these homes were built by Foss Designing & Building Corporation that operated out of Pasadena during the golden age of bungalow construction and several of his homes built during this period still stand in Pasadena today. 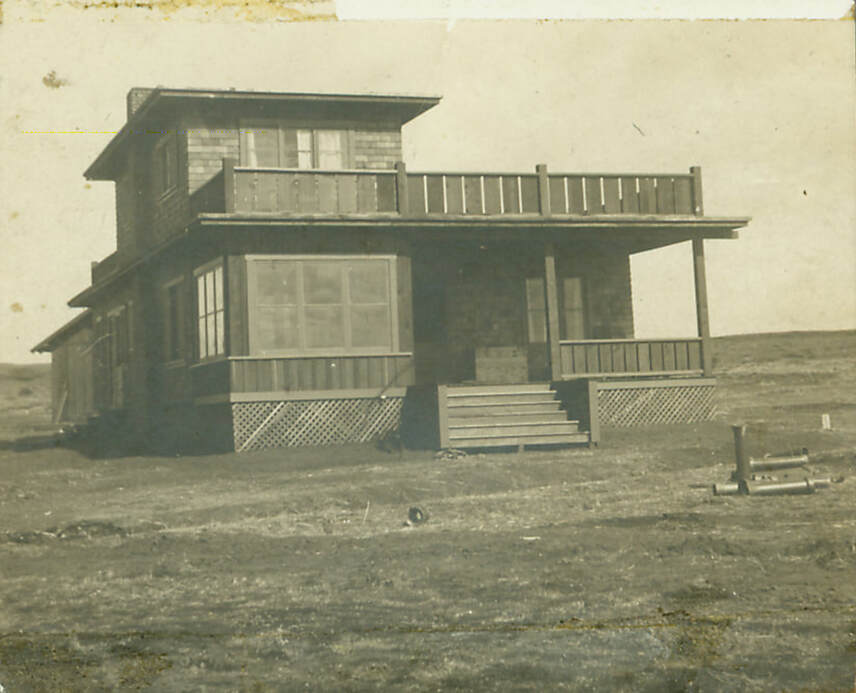 By 1915, only about a dozen more homes would be built and less than 100 lots were sold.   The access never materialized – the train never made it across the bay, the pier was wrecked by waves, and the rough drive on Back Bay road was unappealing.  In 1916, Hart abandoned his investment, trading the remaining 400 acres of Corona del Mar to F.D. Cornell Co. for 5,000 acres in Riverside County.

F.D. Cornell attempted to change Corona del Mar’s name to Balboa Palisades to take advantage of the popularity of Balboa.  The residents would not support this though and the new name was never accepted.  He changed the street names as well, Bayside Road became Palisades Road and Electric Way became Pacific Drive, a name it retains today.  In what became a signature of Corona del Mar, the North-South streets would be re-named as flowers, from Acacia to Poppy in alphabetical.  Poinsettia would initially be named Pansy but quickly changed.  The East-West Streets would also receive their names – 50th became Bayview Drive, 51st became Seaview Avenue, and 53rd to 57th were changed to 1st through 5th Avenue.  Construction began on the West Jetty in 1917 which would protect the harbor, start the buildup of Big Corona Beach, and popularize surfing at The Wedge.  The shorter Easy Jetty added some additional support to the beach which grew out to the end of the shorter jetty. 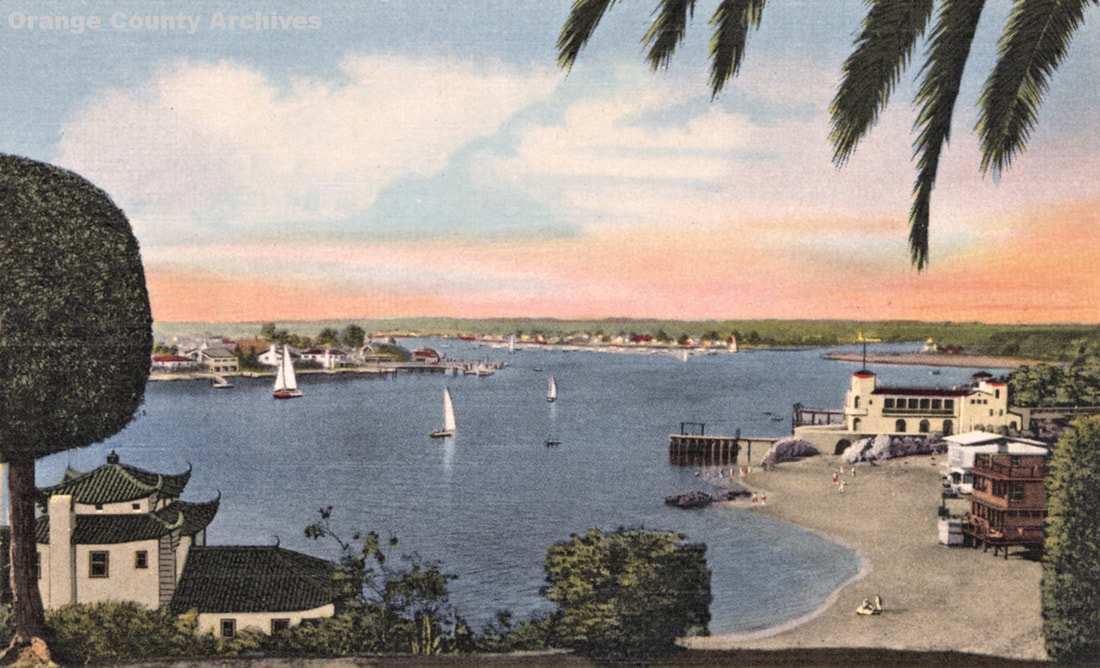 Despite this progress, the same challenges – primarily access – still remained and after only six years, Cornell gave up and sold his remaining interest and the hotel to WS Sparr.  Sparr was in the fruit packing industry and had gotten into real estate.  He improved the hotel and added the Sparr Bath House in 1924 that had a dance hall and sitting area by the bay.  More importantly, in February 1924, Corona Del Mar was officially annexed by Newport Beach which meant residents would receive reliable city services.  The access issue was finally addressed with the construction of the Coast Highway in 1926 which ran from Seal Beach to Laguna Beach.
​
An important landmark was built in 1928 – the Goldenrod Footbridge.  240 feet long with three 30 foot pylons, the bridge has provided access to the coast for CdM residents that are east of Bayside for over 90 years.  Another icon of Corona del Mar, the China House was built in 1929 by department store magnate William Lindsay and his wife Sara.  The Cove was named China Cove for the distinctive house which featured an oriental roofline, ornate fixtures, and a gold leaf dragon.  The home lasted until 1987, when it was demolished. A recognizable building that still remains to this day is Cal Tech’s Kerckhoff Marine Laboratory which was was originally designed as a boat and bath house for the short-lived Balboa Palisades Club in 1926.   Designed for the study of Marine Life, the facility is currently vacant but there has been talk of it being re-opened. 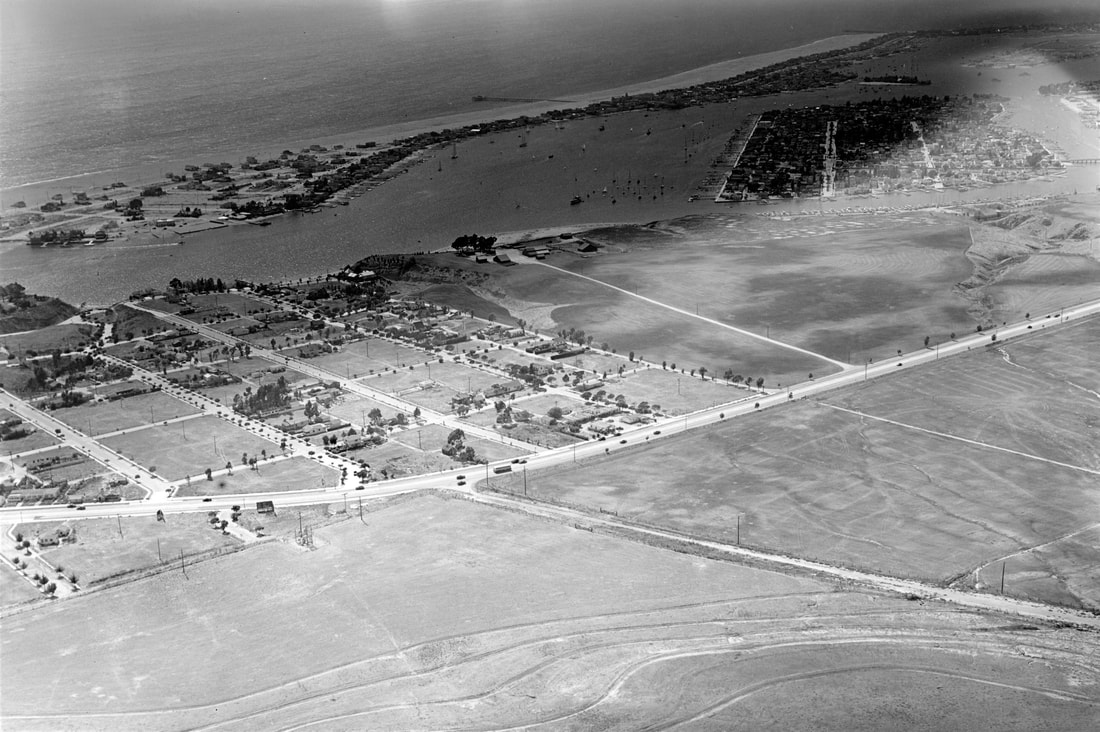 1929 Oscar-winner All Quiet on the Western Front was filmed where Harbor View is today and was one of several notable movies to be filmed in Corona del Mar in its early days.  The Sands of Dee, directed by D.W. Griffith and starring Mary Marsh was filmed in 1912, Macbeth directed by John Emerson and starring Sir Herbert Beerbohm Tree followed in 1916, and Cleopatra, directed by J. Gordon Edwards and starring Theda Bera was filmed in 1917.  Treasure Island directed by Chester & Sidney Franklin and starring Francis Carpenter was filmed the next year.  The Count of Monte Cristo and Robert Louis Stevenson’s Treasure Island were other noteworthy films produced in Corona Del Mar.
​
When the Stock Market Crash of 1929 hit, there were still very few homes built and no real businesses to attract potential residents.  Lot sales picked up as the Depression ended but the start of WWII prevented the sale of lots along the coast.  As the war came to a close in 1945, more than half of the lots were still available but that would quickly change as returning veterans and those who had been brought to California for the war effort bought up the lots.  An aerial photo from 1940 shows entire vacant blocks but by the end of the decade it was well-populated.  A 1937 real estate brochure features a large waterfront home with 100 feet of frontage for $11,750 ($200K today) and some more modest homes within 2-3 blocks of Ocean Blvd for $3,000-$4,150.  One of them, 217 Larkspur, still survives today.  Selling for $4,150 at the time (equivalent of $75K today), Zillow lists its value at over $3M (which seems low). 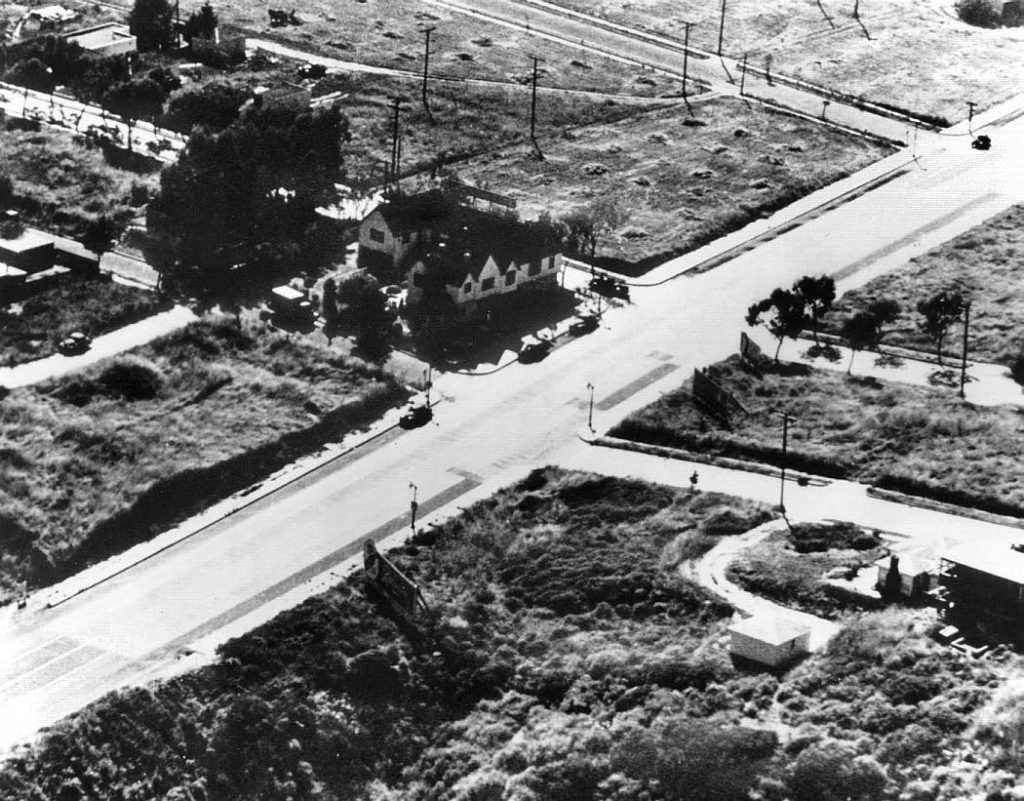 Corona Del Mar’s oldest restaurant, known today as Five Crowns was built in 1936 by Matilda “Tillie” Lemon MacCulloch.  An American wife of a wealthy Scotsman, she lived in England but had grown up visiting Southern California as a child.  She modeled it after Ye Olde Bell, an inn at Hurley-on-Thames, 35 miles west of London, England and called it the Hurley Bell.   Local architect Shelby Coon used photographs of the inn to design it.  Originally planned to be an inn, the MacCullochs ended up making it their home.  Shelton McHenry and Bruce Warren who ran the Tail o’ the Cock Restaurant in Los Angeles leased it for a new location in 1943 but it would only last for 3 years.  Tillie and her daughter would revitalize the Hurley Inn for a few years until Tille’s death in 1948.  After leasing it to a series of unsuccessful entrepreneurs, the restaurant was leased to the Frank and Van de Kamp families and was re-modeled and re-opened as the Five Crowns in 1965.  It continues to operate today, having been purchased by Lawry’s Food Corporation in the 1980s.
​
Many more businesses would come to Pacific Coast Highway to serve the needs of the rapidly growing number of residents in the late 1940s, as well as the increasing amount of tourists who were now attracted not only by the beaches, but the growing village around it.  More businesses were opening along PCH, The Snack Shop which would later start the Coco’s Restaurant Chain, opened on Acacia in 1949, where the Ruby’s is today.  The Port Theater opened in 1949, as well, and after several openings, a closing and a total renovation, still remains today.  Besides the rapid growth, the 1940s would include another milestone in CDM history – the last snowfall.  In January 1949, residents woke up to snow – an event that has not been repeated in the 70 years since. 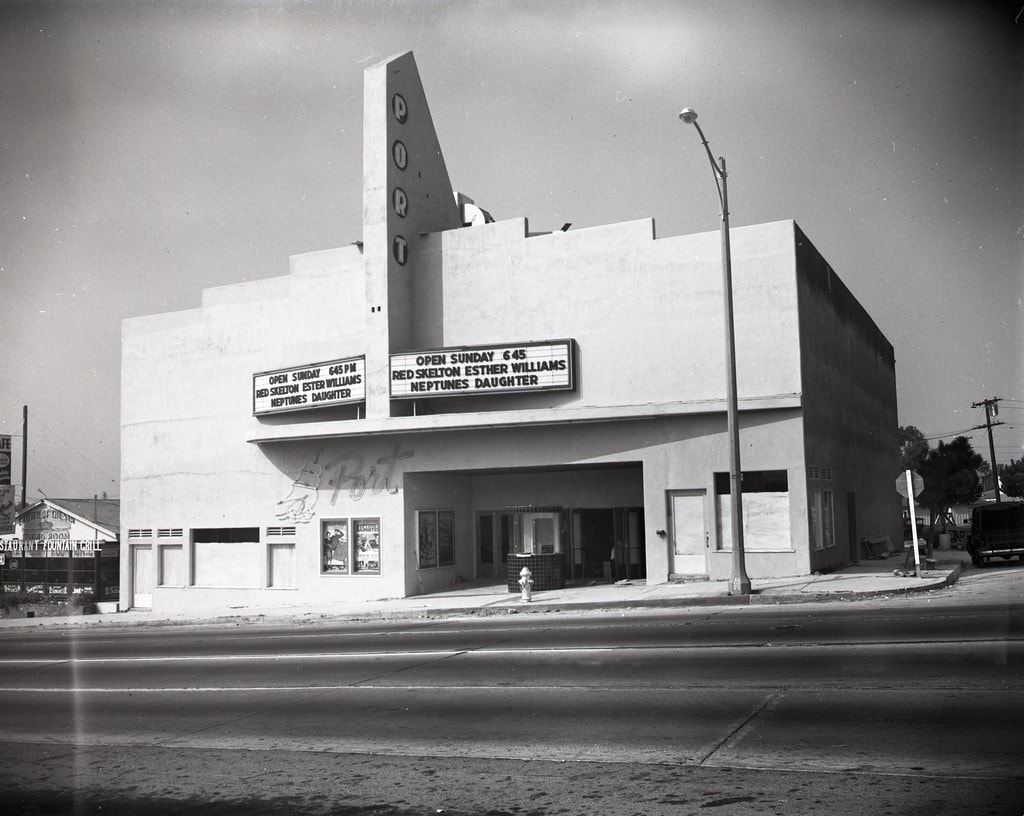 The new Post Office opened in 1952 – and while there was previously a capital ‘D’ in Corona del Mar, it was now officially listed by the Post Office as Corona del Mar.  The following year, Jamboree Road was cut through – not to create greater access for tourists to the beach but for a different reason altogether, that would also give it its name.  The Boy Scouts held their annual ‘Jamboree’ on the slopes overlooking Newport Harbor and thousands of Boy Scouts came to town to camp on the terrace.  The late 1950’s brought CdM another of its great landmarks and attractions – the Sherman Library and Gardens.  Located between Dahlia and Fernleaf along PCH, the 2.2 acre complex includes beautiful gardens as well as an amazing research center. 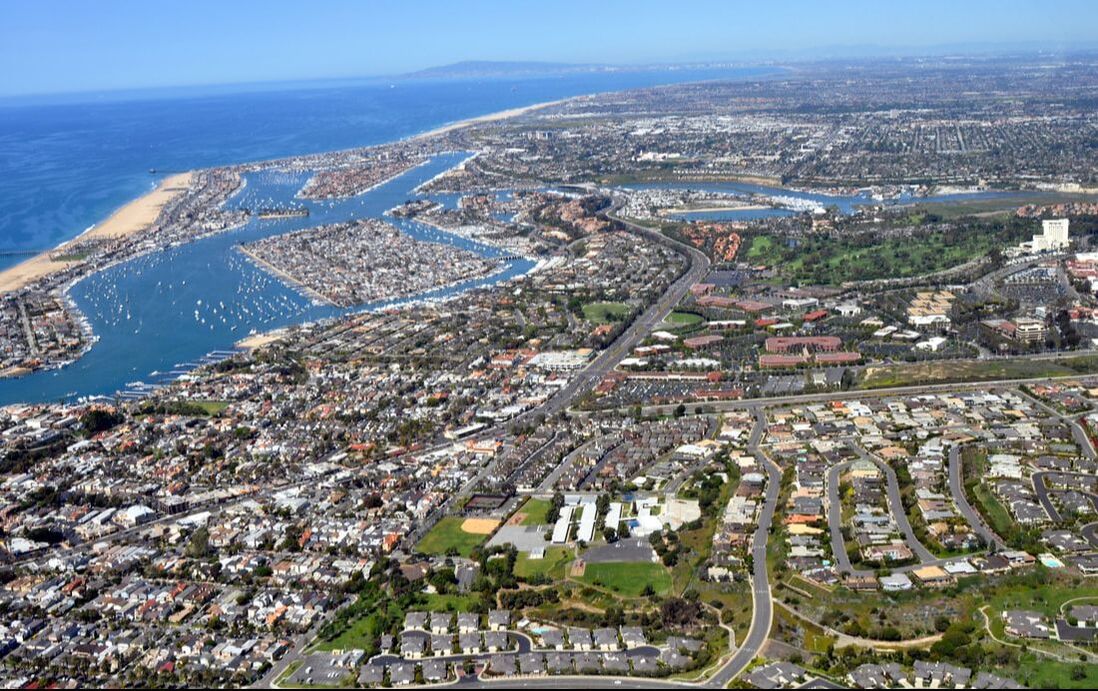