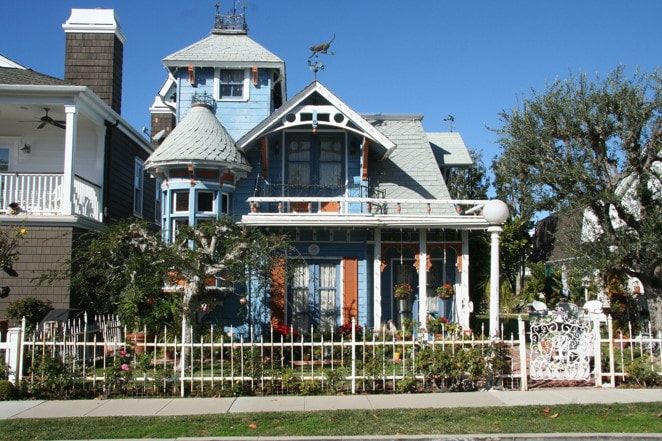 The little cottage turned Victorian at 427 Fernleaf is certainly a wonderfully unique part of CdM’s history but the pieces that make the 75 year old home special actually have an even greater historical significance – one that goes back almost 150 years and connects the home with the Irvine Ranch and the early founders of Orange County.
​
Corona del Mar’s only Victorian actually started its life as a little red cottage.  In August of 1958, Dick and Jane Croul, who had been renting a home at 2310 First Ave. (btw Acacia & Begonia), purchased the house from John and Lucille Templeton for $13,500 which began a 60+ year ownership that continues today.  The Templetons had lived in the home for seven years after buying it from its original owner, John Bennett Jr. and his wife Lois Lee, who had built it in 1944 after purchasing the lot from the city. 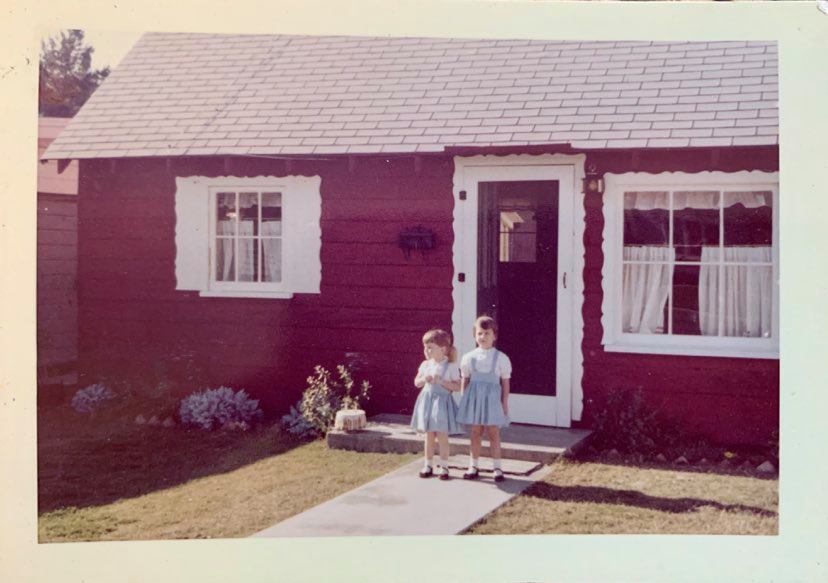 427 Fernleaf began its life as a little red cottage, shown in this circa 1960 photo. (Photo: Croul family)
While at the center of the current home is the original house that the Templetons and Bennetts lived in, the home you see today is all the vision of Dick Croul.  The Crouls had two young daughter when they bought it, so before they ever moved in, Dick, who would later serve on the city council, expanded it out the back adding two bedrooms to the small home.  He finished that work and the family moved in, in January 1959.  Ten years later, they now had three daughters and as the children were getting older, they were looking to add some more space. 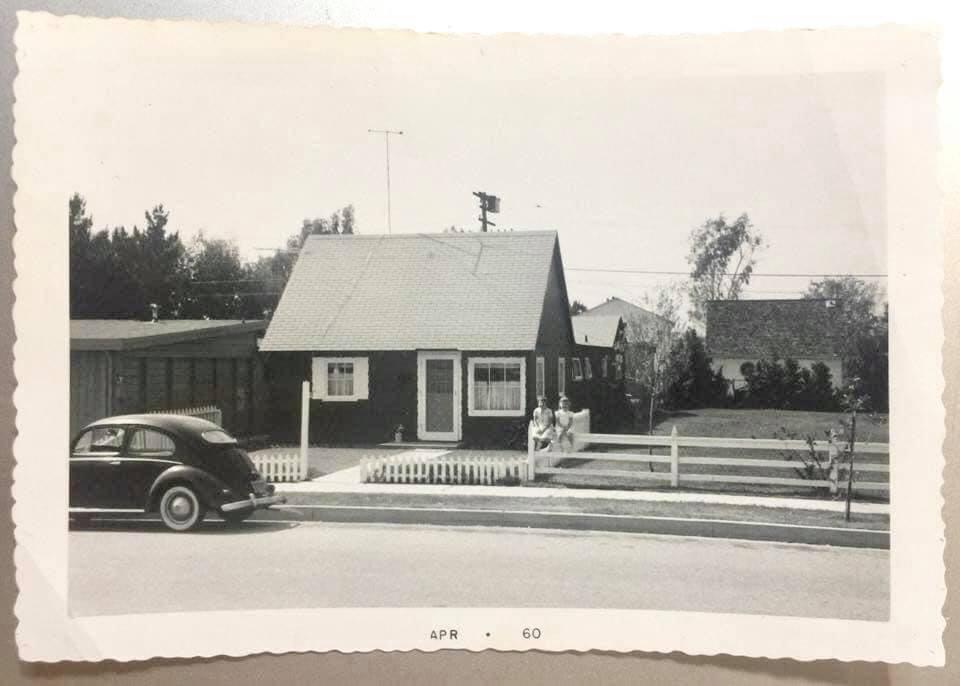 1959 addition out of the back of the house can be seen in this photo that also shows the vacant lot next door. (Photo: Croul family)
A 1992 LA Times article recounts how the cottage end up as a Victorian.
It all started with a family ski trip to Aspen in 1969.  At that time, the Crouls were already thinking of remodeling the small Corona del Mar house in which they’d lived for 10 years.

Dick, then a building contractor and former Irvine Ranch cowboy who herded cattle across once-open plains, was contemplating a Spanish Colonial design.  Jane like that idea, too.  But after seeing the Victorian architecture of Aspen, they had second thoughts.  Victorian was charming, they agreed. Funky, different.

​“It was actually one of our [three] daughters who first said, ‘Let’s not go Spanish, everyone’s doing it,’” Dick said.  “She said, ‘How about building one of the crazy houses like here.  We kind of brushed it aside, but started thinking about it.”
Dick “likes a challenge,” said Jane.  “At first he thought it was impossible, but then he thought, well, maybe…”
​With Dick’s mind already working on how to build a Victorian they took a drive to look at the old homes in Santa Ana including the historic C.E. French House, a grand Queen Anne Victorian.  As they approached the French House, located at the corner of Spurgeon and Ninth, there was a bush burning in the home’s front yard.  Dick hopped out to put out the fire.  As he finished, a neighbor came out to help and mentioned to him that the house would soon be torn down.
Dick reached out to Buffum’s Department Store who now owned the house and was tearing it down to put up a parking lot.  They agreed to sell him the turret on the front of the house for $125 but he had to take it down and remove it himself.   He had some of his guys help him and they got it on the truck without much trouble but as they drove it home, it managed to come off the truck on Macarthur.  Falling off the truck broke it apart a bit but also caused a major traffic issue on a Friday afternoon.  In the end, he got it back to the house and Jane says that having it in a couple pieces actually made it easier for him to eventually install.

When the actual demolition happened a couple weeks later, Dick stopped by the site to see if there were any other pieces he might be able to get for his project.  It turned out that some of the nicest pieces of the house were being set aside for a group that never showed up to pick them up so the the demolition company offered them to Croul.  Those pieces joined the turret in making 427 Fernleaf into Corona del Mar's only Victorian. 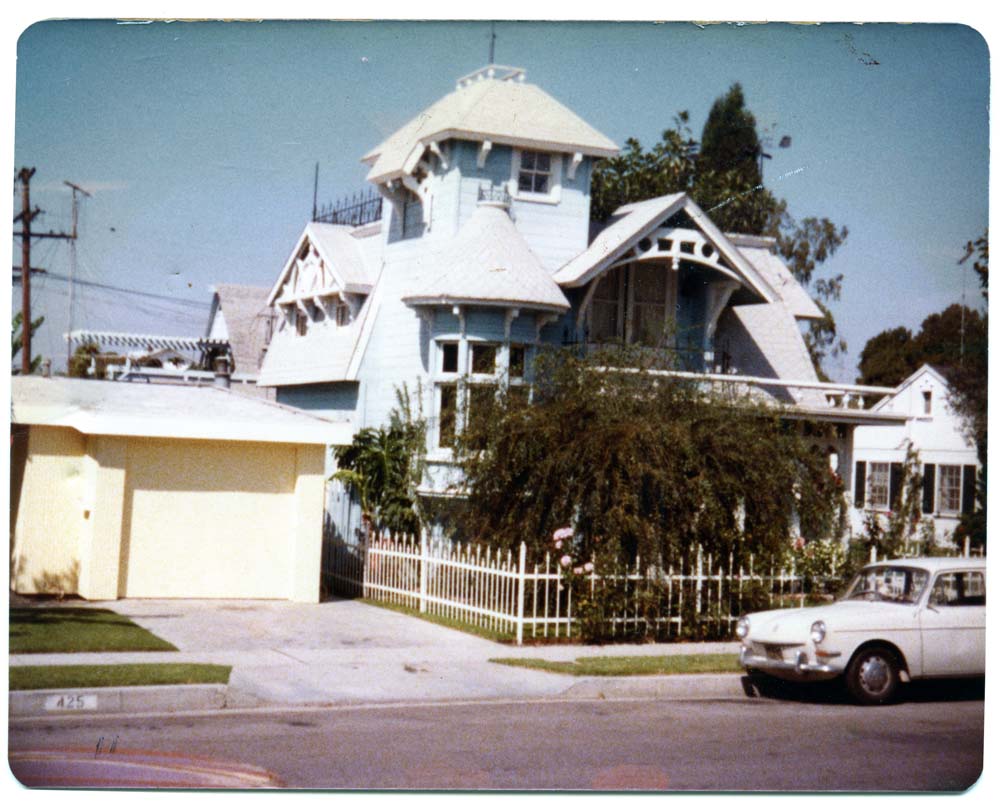 1979 Photo of 427 Fernleaf was taken ten years after its Victorian renovation. (Photo: Sherman Library)
The French House which had been among Santa Ana’s finest homes was built in 1871 and was named for its longtime owner Charles E. French.  It was believed to have been built by Nathaniel D. Goodell who designed the Gallatin House in Sacramento, which became the Governor’s mansion from 1903 through Ronald Reagan’s tenure. 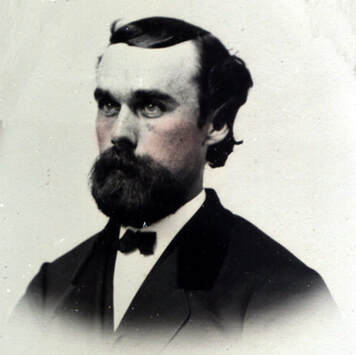 Photo of C.E. French taken post-Civil War
The following bio of French is from the Online Archive of California:
Charles Edwin French was a resident of Santa Ana, California who contributed significantly to the city's growth during the mid to late 19th century. He actively promoted Santa Ana and the surrounding area as an ideal place to live and conduct business. Professionally, he facilitated real estate transactions, was postmaster of Santa Ana, and managed Irvine Ranch for a time. He was responsible for the construction of the original Irvine family ranch home in 1876. He was instrumental in establishing the first horse-drawn street car line in what is now Orange County and was named secretary of the Santa Ana, Orange, and Tustin Street Railway when it was incorporated in 1886.  He built French's Opera House, which opened in 1890 with a benefit starring Madame Modjeska as Lady Macbeth.  French Street, French Elementary School, and French Park (an exclusive residential neighborhood in early Santa Ana) were named for him and his family.
​
​Several articles mentioned French as “one of Santa Ana’s wealthiest and best-known citizens” and his house at 215 E. 9th Street was said to be the “most elegant house in town.”

The French House was torn down to create an additional parking lot for Buffum's, which is shown in this undated image. The house would not have been visible in this photo but would have been just off the right side of this image.
Inside the home, Jane has added many unique Victorian era pieces that make the inside almost as interesting as the outside.  While they were building the house, they learned of an estate sale at the Burns House, the 1907 Victorian next door to the French House that was built for French’s daughter, Gertrude French Burns.   There they purchased a light fixture, chain-pull toilet, small ceiling lights, a chandelier, and stair railing.   The ceiling lights and chandelier are used in the living room, the light fixture is in the hallway, the toilet was installed in the downstairs bathroom, and the railing leads up to the turret.  Later, at an estate sale at the Halladay House, built in 1888, she bought an antique dining table with 12 chairs that they still use today.  At the same sale, they got a stained glass window that was installed in the kitchen along with some parlor doors that were cut in half and make for elegant paneling under the kitchen counter/bar area. 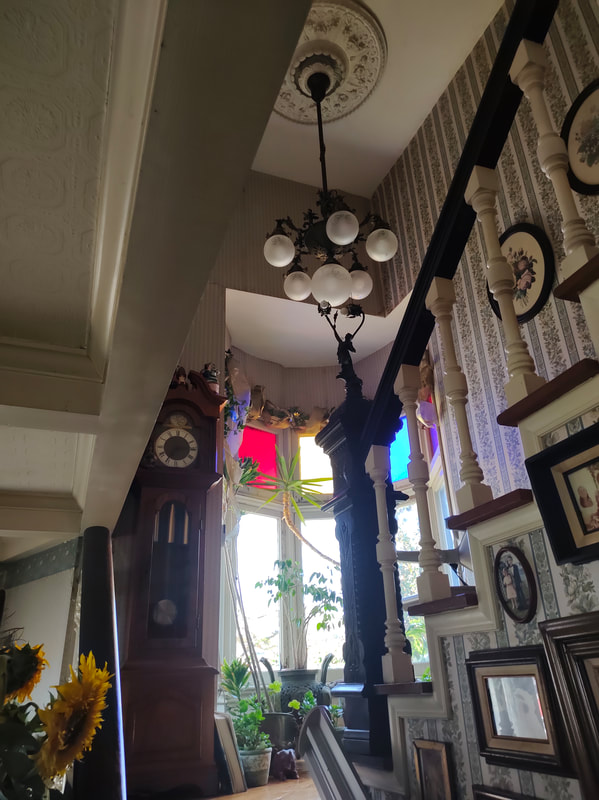 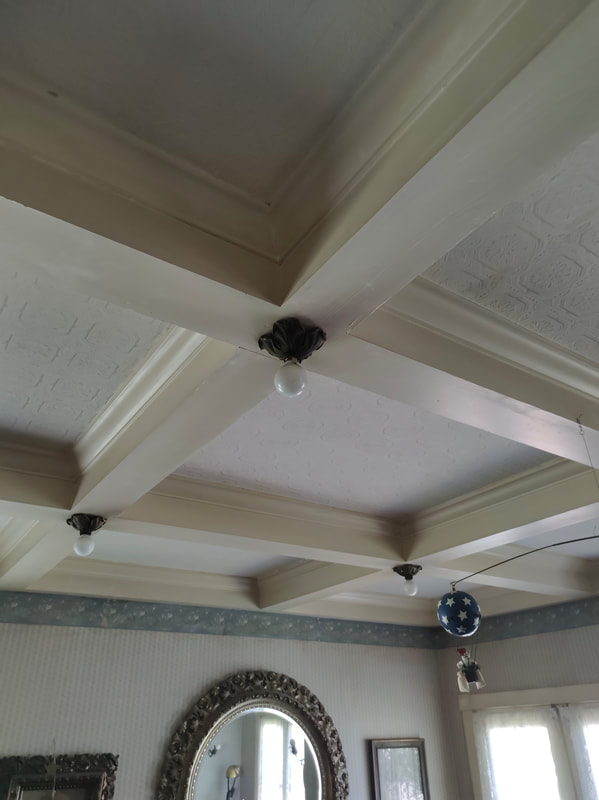 The other thing that is very unique about the home is that it has a full vacant lot next to it.  In a town where having only one house on your lot is very unusual, they may have one of the only lots in CdM that has never had a home on it.  Formerly owned by a previous owner of 433 Fernleaf which is built on a double lot of its own and had a third lot, the Crouls later acquired it.    They have a beautiful gazebo on the lot, as well as a koi pond.  For many years, they would use the space on the lot to throw annual themed parties for their friends and neighbors. 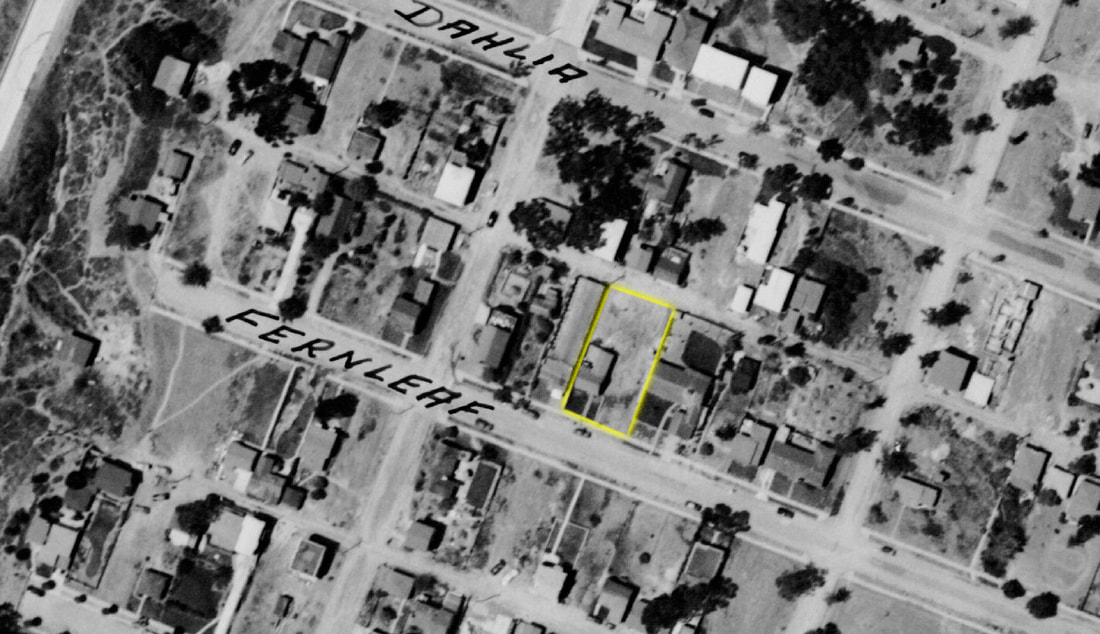 427 Fernleaf and the vacant lot next to it are seen in this 1947 aerial photo. (Photo: OC Archives)
In a 1971 LA Times article, Dick was quoted, “We really love this house because it was our own ideas and our own work that brought it into being.  The way my wife and I feel right now, we’ll never leave here.”  Almost 50 years later, his words hold true, Dick passed away in 2019 at age 90 and Jane still loves and lives in Corona del Mar’s only Victorian cottage.