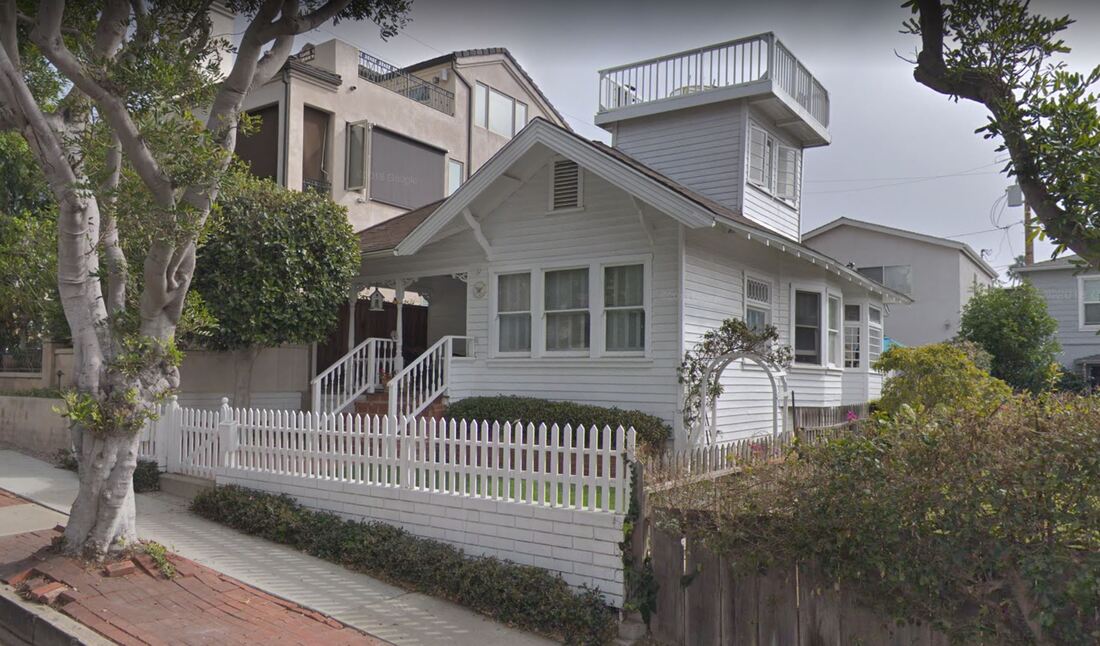 Corona del Mar’s oldest surviving home has sat up on the bluff for 110 years.  In its earliest days its front porch had an unobstructed view of the bay and you could look left and see out to the ocean.  Thanks to an addition made in the 1980s, the owners can still enjoy that view, they just have to go up some stairs to see it as CdM has since filled in all around them.   The first building in CdM was the Hotel Del Mar which was just a block over from this house and was built just 3 years earlier.  The first house was the Burton Family’s Happy House was built in 1909, while 214 Dahlia would go up in late 1910.  There were likely less than a half dozen homes in all of CdM at the time. 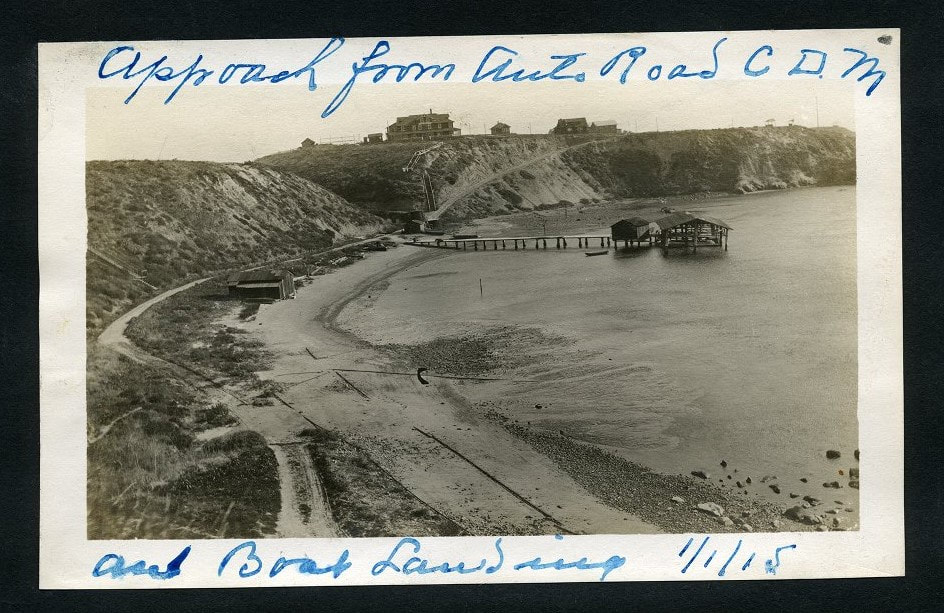 214 Dahlia can be seen just to the right of the Del Mar Hotel in this 1915 photo. (Credit: Sherman Library)
The land at Dahlia was purchased by Eleanor Vallely directly from George Hart, the developer who founded Corona del Mar, in January 1910.  It is possible she didn’t pay cash for the land but rather traded a piano, a fur, and a sewing machine for it, as a note on the tax rolls in 1912 suggests that is how the $115 value of the land was calculated.  There is one story that the house at 214 Dahlia originally came from a bean field in Irvine and was brought over on horse drawn wagons but there has not been a way to substantiate it.  We do know that the photo below was taken around 1910 so the house would have been brand new at that point or it would have been right after it was re-assembled after being moved from Irvine. 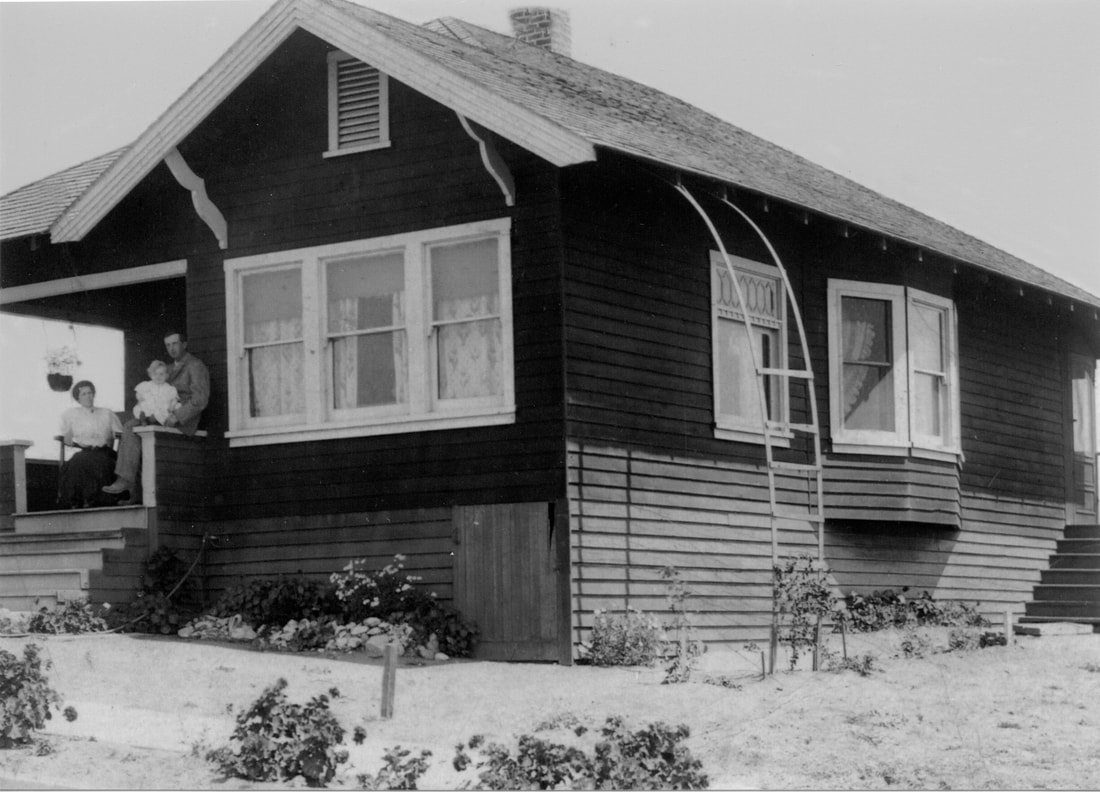 Eleanor and Frank Vallely are on the porch with their son, Roland, in this ca. 1910 photo. (Credit: Sherman Library)
Eleanor was married to Frank Vallely, who was born in Northern Ireland, and ran a boat rental business right at the landing down below the house.  Their son Roland was born in 1909 and he would go on to run the family boat rental business and lived on Balboa Island.  Roland’s son, John Vallely grew up on Balboa Island and won a National Championship at UCLA and played in the NBA.  UCLA’s legendary coach John Wooden once told Orange County historian Stan Oftelie that Vallely was the greatest basketball player ever to come out of Orange County.  They would later have a daughter, Mary, as well.
​ 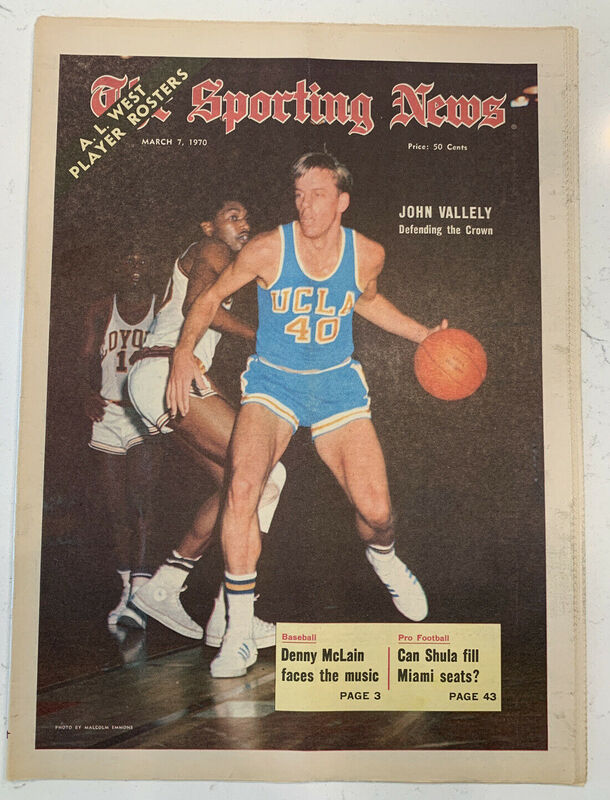 Roland Vallely's son, John, starred at UCLA under John Wooden. (Credit: Sporting News)
In 1921, they sold the house to Dr. Leon J. Roth and his wife, Rilla R. (Wrench) Roth who used it as a beach house in the summer.  Dr. Roth was born in Los Angeles in 1873 and graduated from USC Medical School and was a noted physician and also served as an Army major in WWI.  In 1922, he made national news when he was the attending physician to one of the big Western movie stars of the day, William S. Hart (no relation to George Hart) who contracted typhoid fever, but survived.  Roth would die in 1928, at only 54 years of age but the beach house would stay in their family until 1954.  In the mid 1930s, Rilla was renting it out at times as it was listed for $150/month in the summer.  Roy Brown, the president of the Corona del Mar Civic Association rented the home in the late 1930s.  Rilla’s father, Charles Wrench, lived there for his last two years, before passing away in 1941.  In 1947, she transferred ownership of the house to her two daughters.  They would keep it until Rilla passed away in 1954. 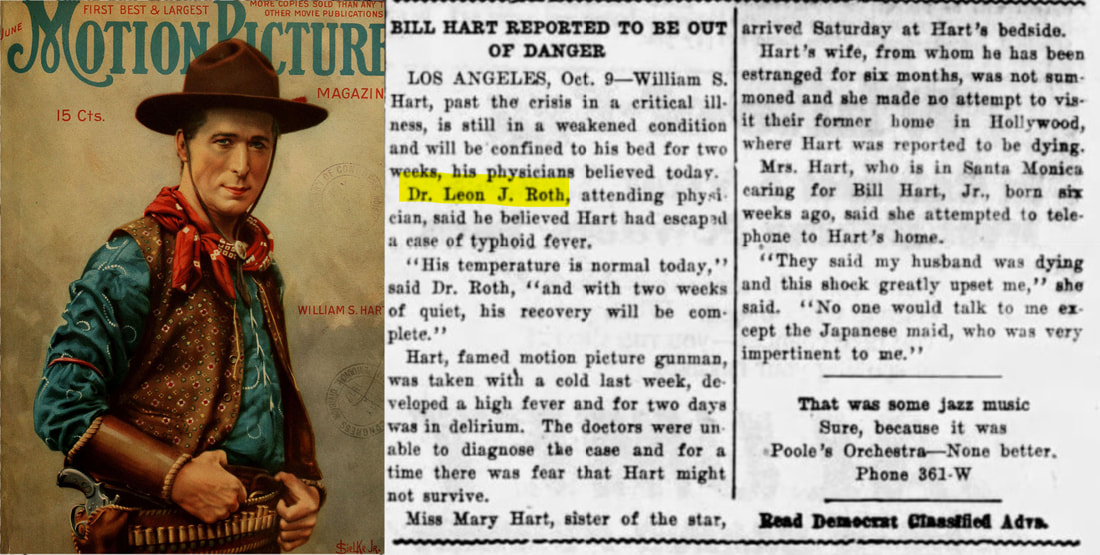 214 Dahlia resident, Dr. Leon Roth, earned notoriety for treating William S. Hart, one of the biggest movie stars of the time.
The daughters sold it to Herbert & Barbara Wheeler who owned it for 5 years before selling it to Marguerite Fuller.  It would remain in the Fuller family for the next 20 years.  The Fullers sold it to James Lindberg in 1979, and he lived there for 40 years before passing away at age 100, but the home remains in his family today. 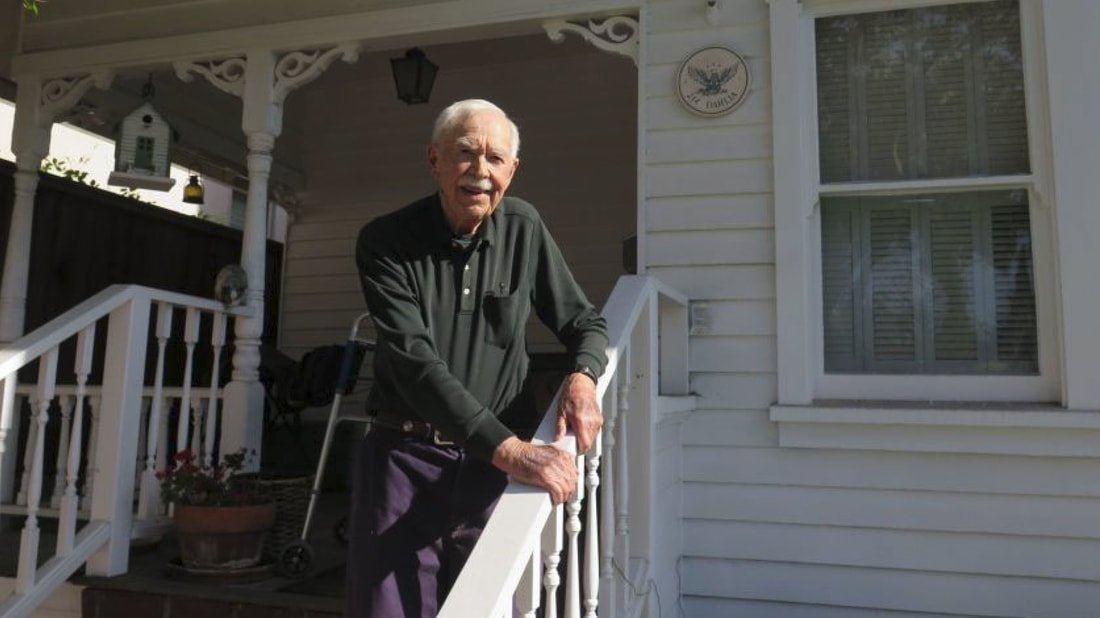 James Lindberg, lived in 214 Dahlia the longest, owning it for 40 years before passing away at age 100. (Credit: Daily Pilot)
The Daily Pilot wrote an article about James Lindberg as he approached his 100th birthday:
Lindberg, who was born at Pasadena’s Huntington Hospital on May 23, 1918, is the son of a Pasadena grocer who immigrated with his family to the United States in 1902. The future general graduated from Pasadena High School and USC, where he was a business major.

​After his retirement from the Air Force, James Lindberg, who had moved to Corona del Mar, became foreman of the Orange County grand jury and served on the Orange County Fair Board. He also was vice president of Dart Industries and a member of the Balboa Yacht Club and owned a 30-foot Catalina-class sailboat.

During his 30-year Army and Air Force career (the USAF became a separate service following the end of WWII), he flew nearly a score of military aircraft ranging from tiny trainers to giant KC-135 aerial refueling tankers and served at another score of bases in the United States, Asia, Europe and South America.

Promoted to brigadier general in 1966, Lindberg served as USAF director of procurement policy and deputy chief of staff for Systems and Logistics at Air Force headquarters in Washington, D.C., from 1967 until his military retirement in 1970. His decorations include the Legion of Merit with oak leaf cluster and the Joint Services and Air Force commendation medals.

We are fortunate that this piece of history still remains on Dahlia, where it has stood for over 110 years.  Next time you are heading to China Cove or down that end of Ocean Blvd., take a stroll by 214 and you'll notice that many of the original details still remain from the 1910 photo.